So, a short update on QL-SD, I have spent another few hundred Euros on parts and everything has arrived except the package with the SD-card connectors, which seem to be lost in the mail. These are needed for the double-SD adapters, which I expect will be pretty popular. Instead of waiting for them to show up I have ordered another batch of 100 connectors elsewhere which should hopefully arrive in 1-2 weeks.

Urs was interested in the micro-SD variant that I have hacked together previously and initially I didn’t want to produce them. But then I wanted to try out another CAD package, KiCad, and this project seemed like a good way to start with it. I haven’t obsessed about this as much as I did on the MDV board and again I ordered the whole batch without having a prototype first, so if it works I have lots of microSD adapters to offer and if it doesn’t fit in the end I have not 😉 But again I have a good feeling about this. These boards, too, should arrive in 1-2 weeks. Here’s a sneak preview: 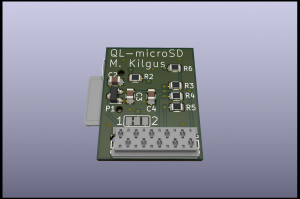 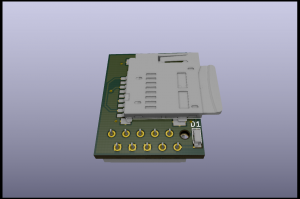 Finally, this is apparently something everybody who ever built QL hardware will produce as some point: a replacement for the SAFT 40LF220 battery. In my case I just wanted to test another PCB service as they had a good offer going and as I finally got myself my own SuperGoldCard (donated by Jochen Hassler, thank you soooooo much) I needed a new battery solution anyway. The only difficult thing was my inner perfectionist rebelling against just using some wire for the four contacts, so I actually spent a few hours sourcing perfectly milled pins for them: 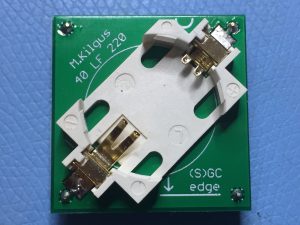 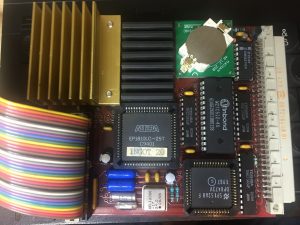 These can be ordered along with a QL-SD for a small price when I’m eventually ready for sale.