GD2 is the name of the new display driver that comes with later SMSQ/E versions. Tony Tebby did the original 16 bit (65536 colours) version for Q40 and QXL, I adapted it for QPC and later also added an 8 bit (256 colours) mode for SGC/Aurora and QPC.

What Tony didn’t do was to supply a new Window Manager that made use of all the new colours. This was the time where I became heavily involved with the further development for SMSQ/E (previously I did stuff concerning QPC but except for bug fixes didn’t mess around in the core).
After Tony dropped out I took the lead and (with the help of others) not only added an enhanced Window Manager but also many other features, like a much enhanced sprite system. Here are some downloads that are of interest for people that want to use the new features.

This is the theme I use on my daily desktop. It consists of:

Curious how all that looks in the end? See here: 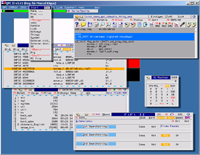 The source code for all this is also included. Just check it out, it’s free!

There’s also one alternative system sprite scheme that features a new cursor (used in applications like recent QDs) that doesn’t simply blink but slowly fades in and out of sight (using alpha blending). This I did mostly for the effect, but you might enjoy it. As the file is a variation for my original theme it also includes the other system sprites like move, resize etc.
I have currently misplaced the source code but I can dig it out if you really need it. Once unpacked the file just needs to be LRESPRed.

Wolfgang Uhlig took the task on himself to create a nice frontend application for altering the system palette. It’s called QCoCo and I highly recommend to check it out! It’s now updated and hosted by Bob Spelten here.

The word processor Text87 was one of the most important applications that didn’t work under the new screen driver at all. Therefore I have taken the time to patch the program to support the 16 bit display mode of QPC/QXL (mode32). Due to the time involved in patching the binary this patch is not freely available but sold for a little fee to at least compensate with a few beers for the time spent.

You can get a program that patches the latest version of Text87 (E4/G4, file size 116850 respectively 117354) for the fee of €12 from one of my distributors. The patch is sold with the permisson of Text87 author Fred Toussi.

Versions for mode 16 and mode 33 now have been released, too.

These are applications that I mostly haven’t written myself but have adapted for the new Window Manager.

Many have asked for it and here it is: a high colour Qascade. Source code included!

Simple button that displays the amount of free memory. It is not only adapted for high colour use but also for bigger memory display and the new memory management scheme introduced with later SMSQ/E versions. The text in the button can be configured.

Small button that shows under how much stress the system currently is (for anybody interested, the number shown is the amount of scheduler switches during 1/50th of a second).

Simple hex/dec/binary converter which I only adapted as a test for the new WMAN. I offer it here nonetheless.

My old 3D starfield screen saver in a new release. It is meant to be used with the CueDark screen saver framework, but can also be simply executed to run stand-alone. Needs a mode32 display to run. Written in 100% assembler and runs pretty smoothly. Amount of stars is configurable.