As any QL owner will know, the Toolkit 2 from QJUMP/Tony Tebby was THE toolkit without which a QL was almost unusable, arguably its contents should have been in the ROM from the start. And I always thought it was quite a shame that such an important toolkit hasn’t been updated in two decades. This got me thinking that most TK2 source files at one time were incorporated into SMSQ/E and that with a little bit of work it should be possible to re-create something resembling TK2 from them again. Turns out I was right, but also completely wrong in how “little” that work is. But still, too many hours later, I presented a brand new Toolkit II release I arbitrarily labeled version 2.30.

This is now based on the latest SMSQ/E source code, with new SMSQ/E features left intact if it was feasible (e.g. the “LOAD” command now automatically tries to append a “_bas” extension to the filename) plus many commands that have been added in the last 20 years (EXF, EX_M, FET, FEW, FEX, FEX_M, HGET, HPUT, JOBID, LGET, LPUT, UPUT, WGET and WPUT).

Unfortunately there are also parts of the source code that were completely missing, like the extended MDV driver. In this case I completely reverse engineered it from an existing ROM binary in a way that you can’t tell anymore that this isn’t the original source code.

The old network server code is actually still supplied with the SMSQ/E source code even though it’s not actually used there. The problem with that is that it’s just too big to fit into the ROM anymore and it probably doesn’t make much sense to run it from RAM because of the different timing. Therefore I didn’t include it for the initial release. The ALARM and CLOCK commands had a similar fate.

The ALTKEY code, too, is included in SMSQ/E without seeing any usage. I didn’t want to include it at first, because with the Hotkey System II it’s very much obsolete. But when tinkering with my QL system the HK2 is often not loaded yet and it drives me crazy when ALT+ENTER doesn’t work to recall the last line. So it went back in. Problem then was that the result was about 200 or 300 bytes too big, so I removed the ALTKEY code but left the ALT+ENTER code in.

Let there be networks

The basic problem is that TK2 already didn’t quite fit into 16KB during its last official versions and it became a lot worse once I packed in all the new features available in SMSQ/E. To make it fit again I had to remove something and I chose the network driver code, last having used it myself 20 years ago to prank my dad. Some people weren’t happy with that, which was to be expected, but there is one point which did stick: the network code cannot even be loaded afterwards as the timing needs to be precise and this is (almost) only possible when the code runs from ROM.

So when I found a way to free a few more bytes in the ROM and I thought about what I could do with them and eventually came up with the idea of splitting the network code: I re-added just the timing critical hardware access routines to the ROM so that the network driver can be loaded later and still work. I think this is a fairly good compromise that would make most people happy.

Martyn Hill kindly beta tested the version for me and later inquired if one could have a full network stack in the ROM and remove some other stuff instead. I was hesitant because for me TK2 is foremost a SuperBasic toolkit and most of the remaining stuff is the basic commands. There is only one part that is even a bit bigger than the network code: the “ED” SuperBasic editor. It includes many improvement over the original TK2 code and thus grew considerably in size. Removing it also has the advantage that you wouldn’t put it into actual SuperBasic code, so the toolkit stays 100% compatible. For me personally “ED” is about a million times more useful than the network code but if you absolutely have to bootstrap a QL without any file systems over the network this is the way to go. Also I do provide a standalone binary for loading later.

So here are all the different flavours:

This has been a long time in the making, actually I wanted to do this many years ago, but the day is finally here: QMake is here for everybody to enjoy. QMake is a “make” tool which basically takes a linker file as input, collects all files that make up the executable and assembles any where the source is newer than the relocatable file. You can also add dependencies like “reassemble win1_fu_asm if win1_keys_bar changes”. I’ve used this tool for well over 20 years to build SMSQ/E and all my other projects and consider it to be pretty much essential.

I’ve created a new page for it, check it out here.

Since changing from MGG to the Minerva ROM a few decades ago I’ve never used an unmodified Minerva ROM, I always used one where the German keyboard tables were patched into the binary somehow (by Jochen Hassler I think). This changed when I installed the QL-SD interface in my QL as it comes with a vanilla ROM where the German keyboard support had to be loaded every time, which I found fairly annoying. But now that the Minerva sources are publicly available changing this is fairly easy: take the Minerva source code plus the source of the German language pack, stir a bit and voila, a new ROM. The only thing missing is the printer translation table as that pushes the ROM beyond the 48KB limit.
As probably not everybody can do such a thing I provide the resulting binaries here, in case somebody finds it useful:

As for an EEPROM programmer I ordered one at my currently favourite Chinese store Ali-Express (being so cheap that I spent a truck-load of money there this year…). In this case I got myself the somewhat more expensive TL866A for just 60€, which also includes a lot of adapters: 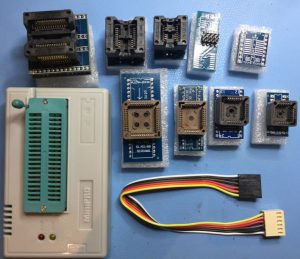 But the smaller brother TL866 can be had for less than 35€ including shipping. This is an amazing piece of hardware for the price (usually it’s also available on eBay for slightly more) that finally lets me retire Jochen Hassler’s excellent but nowadays slightly outdated QL Eprommer II board: